A life on the water 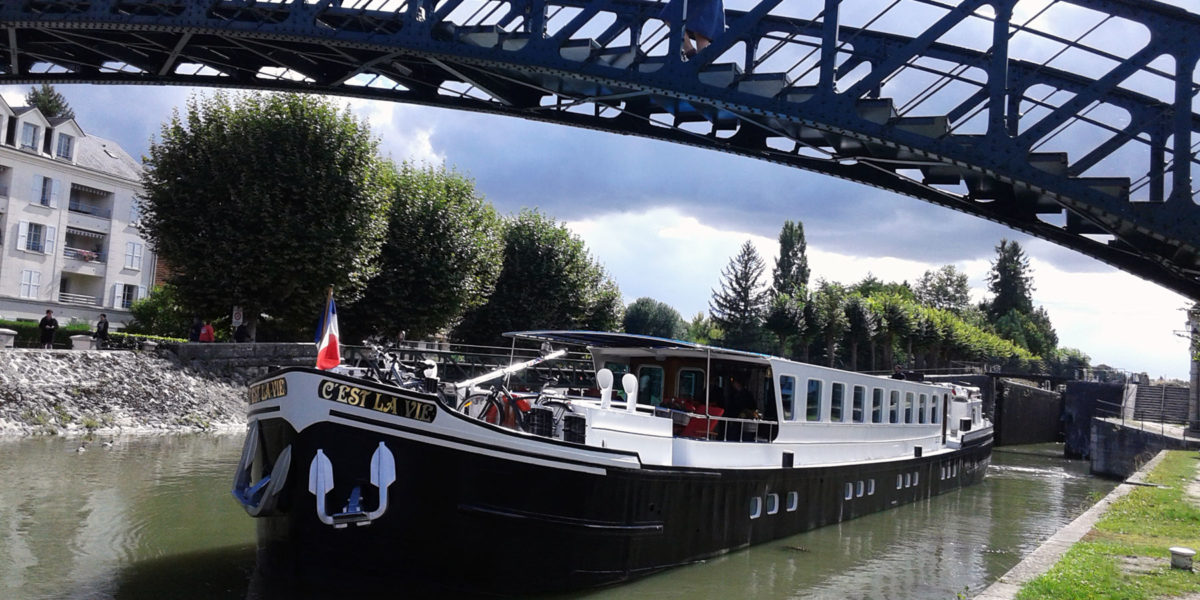 The story of the C'est La Vie

Our stories start in different countries, mine in England, where I grew up in Stratford upon Avon, (the birthplace of William Shakespeare), and Olivier’s in France growing up in Burgundy, from a family of restaurateurs, south of Dijon. A true Burgundy boy.

I, at the age of 19 was lucky (through a friend Mark) to get a job at the Stratford upon Avon Marina, where I cleaned, painted, varnished the 30 narrowboats we had to rent out for self-hire. This was my introduction to life on the water, never thinking I would find myself a few years later working as a hostess on a hotel barge in France. The first time I came face to face with a 128ft hotel barge, I was amazed at its size compared to the 60ft narrowboats I had been used to working on.

My first season in France was in 1986, working on a boat called the Jeanne, where again luck played its part as Mark was the captain of this hotel barge, (having come out to work in France the year before). So I applied to Mark for a job, catering for 24 passengers. I thought it was the best job in the world. But I missed England so after 3 seasons, I decided to stay in England and look for work there. It was in 1994 I returned to boat life and found a job on a hotel barge in the Champagne region, during that summer I did a week’s replacement on another boat, where again my friend Mark was the Captain and the following year I applied to that company for a job and it was then that I was employed by Olivier, the captain of the hotel barge Nenuphur.

Arriving at the train station in Laroche Migennes, I walked the few hundred meters to the port and found the barge which would be my home for the next 4 years, and change my life forever.

Deb during early days of the barge 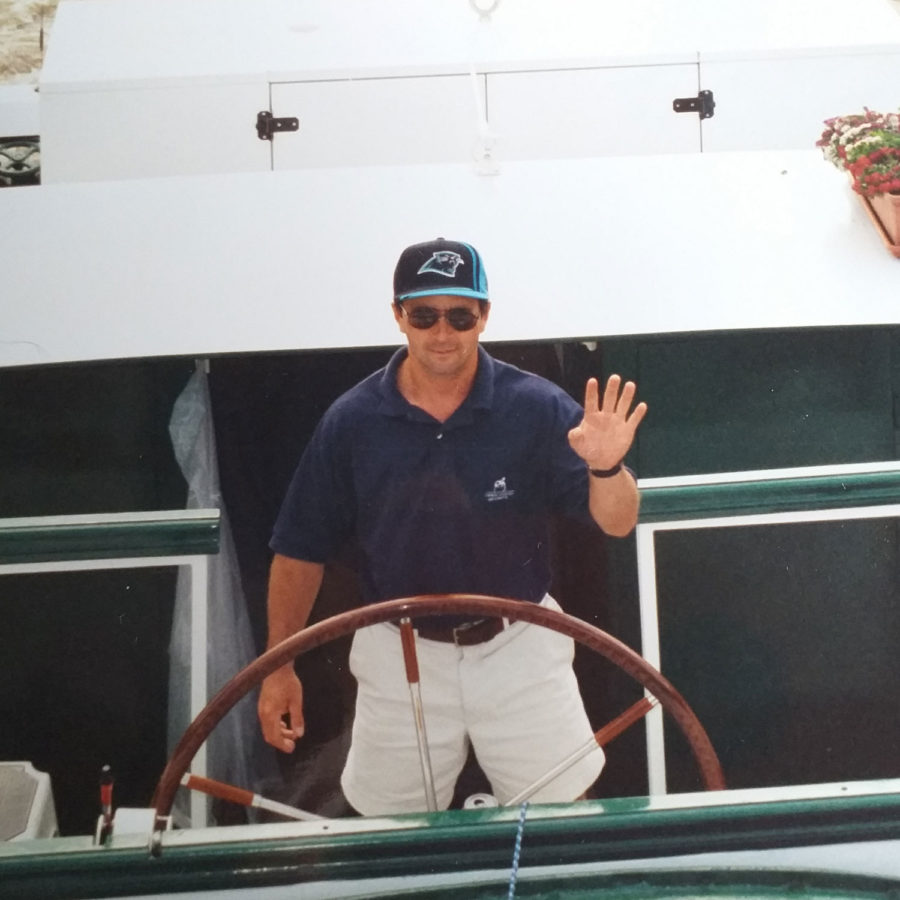 Olivier during early days of the barge

Olivier’s introduction to life on the water was quite different to mine, but again a chance of luck.

Olivier’s parents (Guy & Michelle) owned a hotel/ restaurant called the Diligence (Stagecoach) on the river Doubs. And Olivier while growing up helped in the restaurant and later trained to be a chef as did all of his siblings.

But it was in the year 1966 that an English gentleman called Richard Parsons came to the families’ restaurant to enquire if he could bring his clients to eat there one night during the week. It turned out this encounter would lead to a lifelong friendship, so much so that Olivier’s brother was named after him, and shape the futures of the whole family.

(I should explain about Richard Parsons, he is the reason we are all here, he was the first person to have the idea to convert an old cargo barge into a floating hotel. And now more than 60 years later the industry is growing and going from strength to strength. )

Although Olivier never worked for Richard Parsons, it was through his contacts that he started work as a chef on a hotel barge in 1985 and it wasn’t long before the whole family were working in this industry, parents included.

Although I started in 1986, at that time our paths never crossed, but in 1995 well that’s where our story begins. I came to work as a hostess and fell in love with my Captain.

But our relationship didn’t really start until 1996, Olivier had a 2-year-old son from a previous relationship and I became very good friends with his mother, Sally another English girl, so from the very beginning of our relationship, Tom was always a part of my life. By now I was living in France with Olivier and my life was here, I would visit my family in England whenever I had the chance. But when we bought a house in a small village in 2004, my family would come and spend their summer holidays here. Our wedding in 2006 bought the two families together again and my father made a speech in English and French, which was very much appreciated by the non-English speaking members of the wedding party. 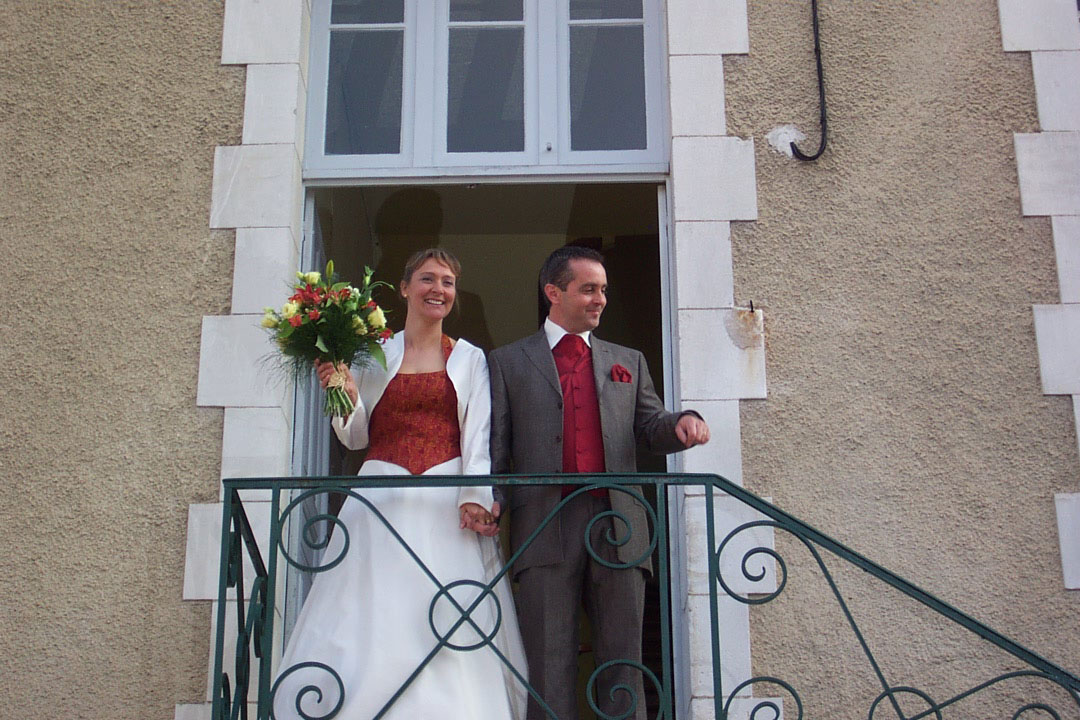 Also in 2004 Olivier got a job on a private boat called the Lone Star, owned by a Texan called Mike Baker, Mike had started building the Lone Star in 2001, with the intention of putting it on the market as a hotel barge. But with 9/11 our industry had taken a bit of a hit and it wasn’t really a good time to put another boat on the market. So work stopped and resumed a year later, by this time Mike decided to build it for himself and his family and so in 2004 she was ready to set sail and this is when Olivier captained the boat that would later become the C’est La Vie.

Mike unfortunately didn’t use the boat as much as he would have liked, so in June of 2009, he decided to put it up for sale. The price tag was a bit too high for us at this point and so the boat sat in Belgium, (where she had been built) for a year until Olivier and Mike came to an understanding where Olivier could buy the boat over a few years.

So a new chapter of our life was about to begin. 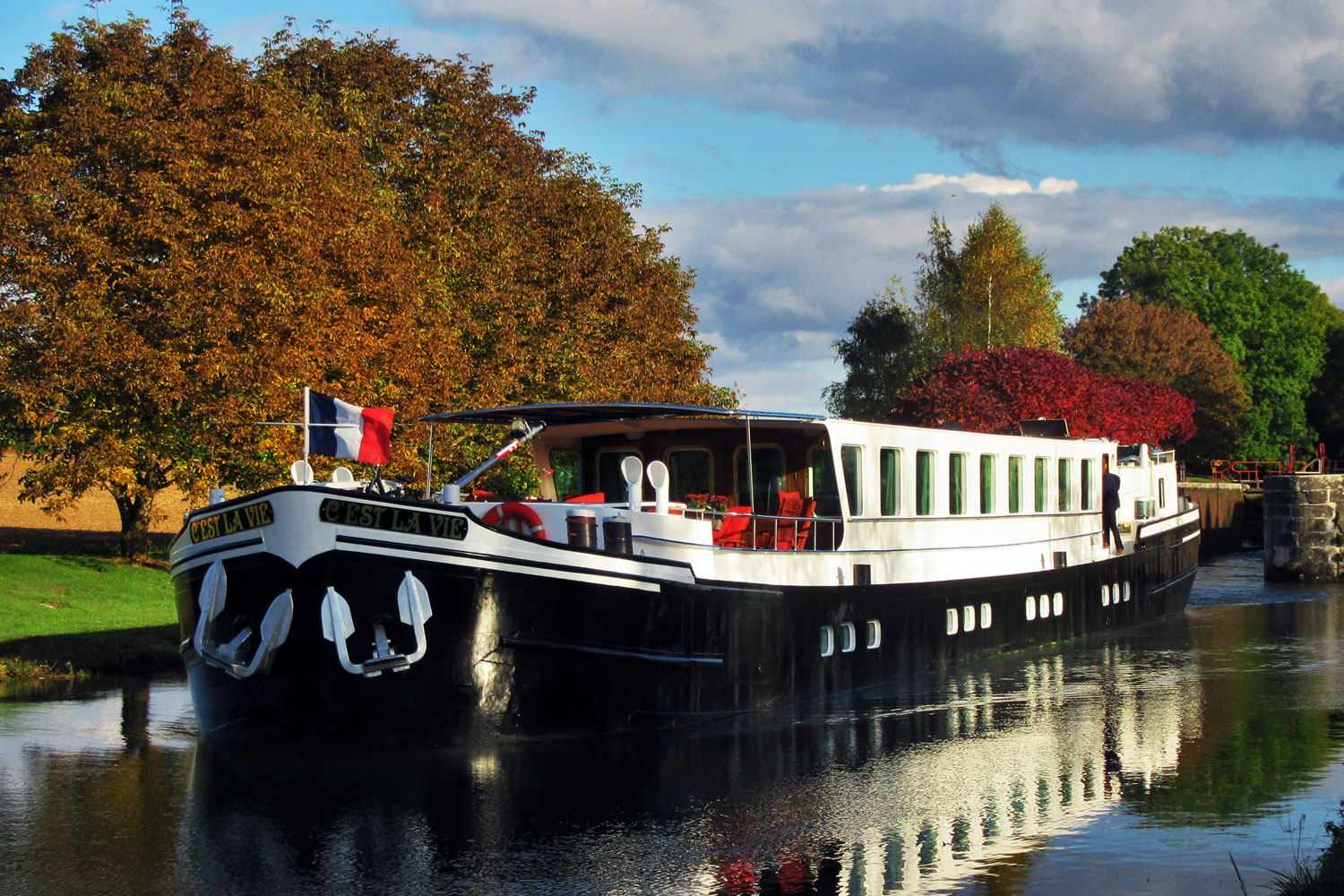 The C’est La Vie on the waters of France

The first job was to change the name; one more fitting for a boat now owned by a French man, so C’est La Vie was chosen and a new way of life was about to begin for her also.

Luckily for us, she had been so well built, that even after sitting for a year in a shipyard in Belgium, she had very little wrong with her and so we bought her back to France in September of 2010, close to our home to start the refurbishments.

Our first guest arrived a few months later in April of 2011 and so now into our 10th season, we have enjoyed showing our parts of France to all who have sailed with us and many who over the years have returned and have become good friends.

We have been lucky, to have Olivier’s son Tom join us a few years ago, and one day he will take over but until then we are working as a family and enjoying every minute of it. 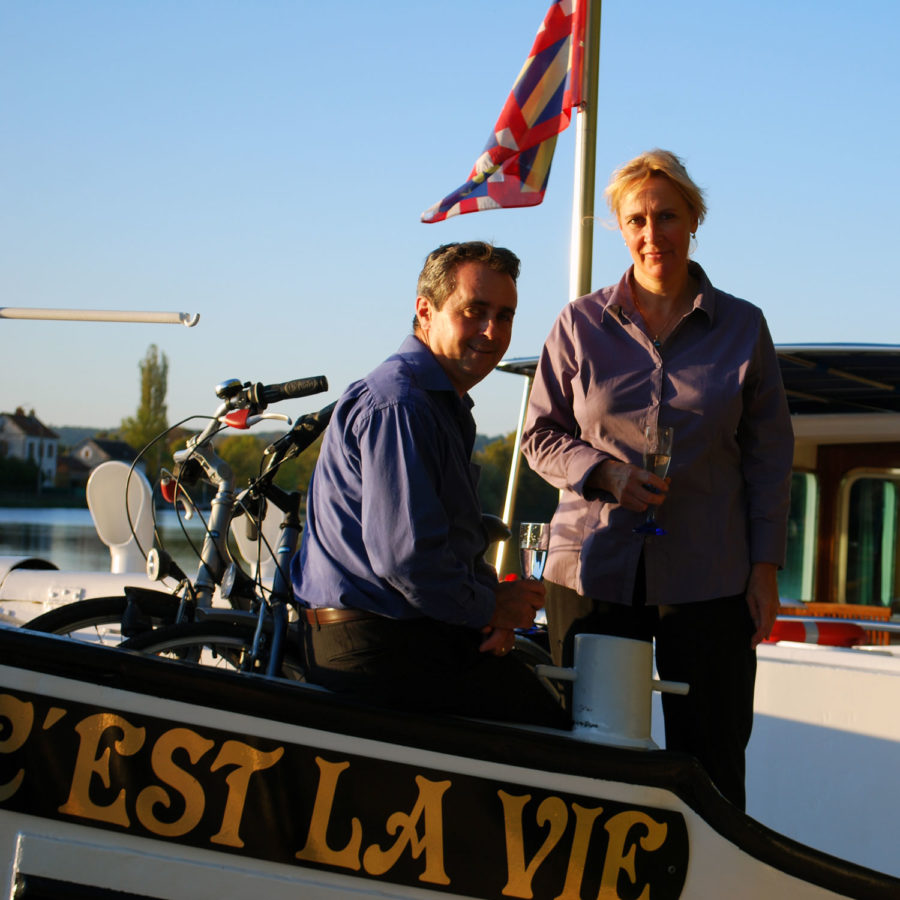 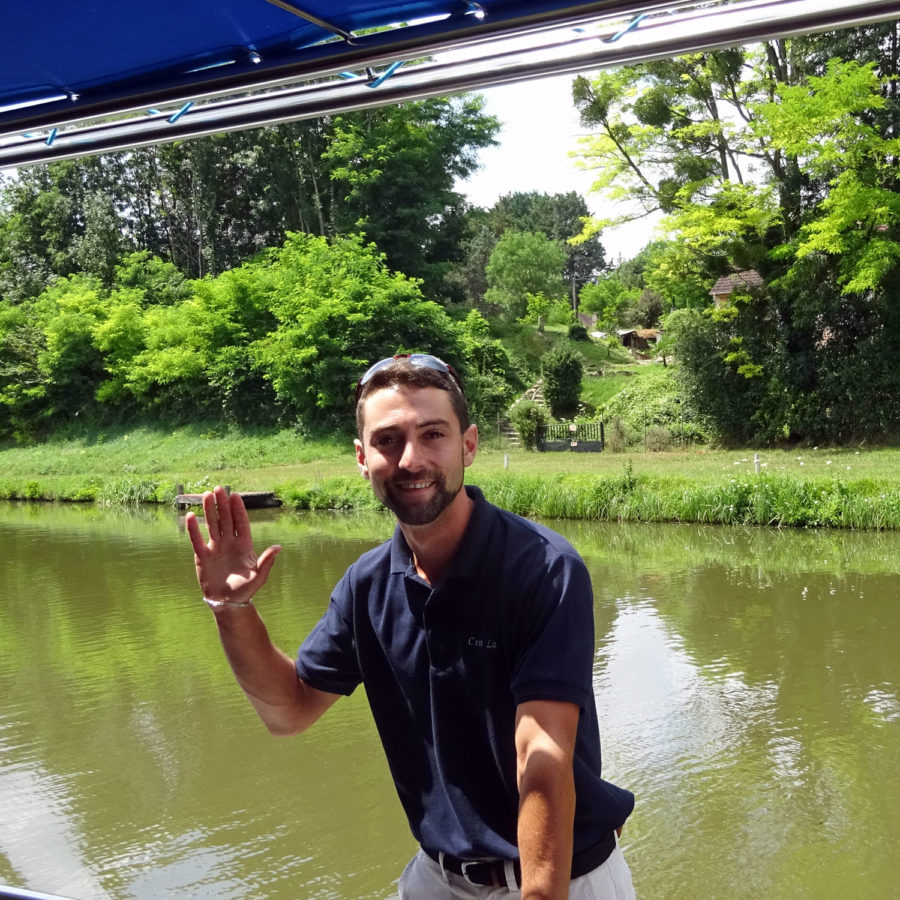